Aqueous(Aqueous Humor)
Aqueous is the clear fluid produced by the ciliary body to nourish the lens, cornea and provide the shape for the eye.

Age-related Macular Degeneration (AMD)
AMD is a disease of the central retina associated with advancing age.  AMD causes damage to the macula leading to central vision impairment; the patient may lose the ability to see other peoples faces, or to perform tasks that require detailed vision.  The peripheral vision will not be affected.

There are two types of AMD:
At present, there is no cure for both types of AMD.  "Palm Pressure Therapy" may improve the condition so the patient may be able to see better.

Cornea
The cornea is the transparent dome shape forming the front of the eye help focusing. It contains no blood vessels but many nerve endings.  I

Choroid
The choroid composes of blood vessels to help nourish the back part of the eye. The Choroid situated between retina and sclera, and connects to the ciliary body at the front of the eye and attached to the optic nerve at the back of the eye

Ciliary Body
The ciliary lies behind the iris and has three functions:
Conjunctiva
The conjunctiva is a thin transparent tissue that covers the sclera, the outer surface of the eye.  It secretes oils and mucus to lubricate the eye.

Central Retina Vein Occlusion (CRVO)
CRVO is a blockage of the central vein of the retina.  In some cases,  blood and fluid leak through the walls of the vein.  Excessive fluid collecting at the retina causes blurred vision.  A patient with CRVO may develop retinal hemorrhage, macular edema, and retinal plasma leakage. If a patient experiences CRVO in both eyes, there is a greater probability of an underlying systemic involvement.  According to the Ophthalmologist, there is no definitive treatment for CRVO.  There are two types of CRVO:
Central Retina Artery Occlusion (CRAO)
CRAO is a blockage of the central artery of the retina.  It causes severe, sudden painless loss of vision.  The vision in the eye with CRAO ranges between counting fingers and no light perception. No treatment is available at present.

Fovea
Fovea located at the center of the macula.  It is responsible for the ability to see details.

Fundus Exam is the examination of the interior surface of the eye, includes the optic disc, retina, macula, fovea, and posterior pole.

Glial cells (Neuroglial cells)
Glial cells are quite different from nerve cells. The primary distinction is that glial cells do not participate directly in synaptic interactions and electrical signaling.  They provide support and nourishment to the nerve cells so they can function properly.

There are three types of glial cells in the mature central nervous system:
Iris is the colored part of the eye, embedded in muscles that dilate and constrict the pupil to control the light level to the retina.  The color of the iris comes from melanin pigment cells. Each person's iris is unique.  The iris divides the anterior chamber (front of the eye) from the posterior chamber (back of the eye)

Lens (The crystalline lens)
The lens located behind the iris helps focus light onto the retina. The lens changes shape when looking at close or distance objects, this phenomenon called "Accommodation."  The accommodation changes with age as the lens gradually harden.

Lamina Cribrosa
The lamina cribrosa is a mesh-like perforation in the sclera. It has functions that include:
Macula
The Macula located at the center of the retina has a high capacity for resolution because photoreceptors are much denser in this area.  It is responsible for detailed central vision.  The ability of the eye to see the details called "Visual Acuity."

Macular Hole
A macular hole is a degeneration of Macula to the point that it becomes a hole.  As vitreous fluid leaks through the hole, it can cause the retinal detachment.

IOP or Intraocular pressure refers to the fluid pressure measured at the eye using a Tonometer.  The calibration of Tonometer is in millimeters of mercury (mmHg).  Average IOP should not exceed 21 mm. Hg.

Optic Atrophy
Optic atrophy refers to the death of some or most of the nerve fibers in the optic nerve, resulting in blurred vision, abnormal color vision, and side vision, and decrease in brightness.


The cupping is the result of die-off axons (extension of the neurons), typically a sign of glaucoma. Glaucoma is the only optic nerve disorder that caused severe cupping. All other diseases make the optic nerve pale.

Pupil
The pupil is the opening in the center of the iris.  The size of the pupil is controlled by the iris muscle and determines the amount of light entering the eye.  The doctors use the reaction of the pupil to light to evaluate a person's neurological function.

Retina
Retina is the innermost layer of tissue contains the photoreceptors (light-sensitive) that convert light into electrical impulses.  These electrical impulses travel along the optic nerve to the brain that interprets them as images. The center of the retina contains Macula.  The Macula is responsible for detail vision.  At the center of the Macula is the Fovea, which has a significant function in detail perception.

Retinal Ganglion Cell (RGCs)
RGCs are the output neurons of the retina.  The axon of RGCs travels through the optic nerve to the brain

Retinitis Pigmentosa (RP)
Retinitis pigmentosa is an inherited eye disease that affects the retina.  It is often affected, children and young adults.

The most common form of RP causes progressive loss of vision, beginning with night blindness. As the disease progresses, patients lose their peripheral vision, but a central vision remains clear (tunnel vision). Some patients with retinitis pigmentosa may maintain a small degree of central vision throughout their life.

Other forms of RP have an effect on central vision first. The patients will not be able to use glasses or contact lenses to correct the loss of central vision.

Sclera
The sclera is the white part of the eye that protects and controls the movements of the eye.  The optic nerve attaches to the back of the sclera at the Lamina Cribrosa.

Vascular Endothelial Growth Factor (VEGF)
VEGF is a signaling protein with the primary function of stimulating the growth of new blood vessels after an injury and the growth of muscle following an exercise.

Vitreous (Vitreous Humor)
Vitreous composes mainly of viscous water that fills the center of the eye. The viscous property contributes to the form and shape of the eye and allows the eye to return to its normal shape after compressing.  In a healthy eye, the vitreous attaches firmly to the retina.  With age, the consistency of the vitreous becomes thinner and separates from the retina, causing floaters. 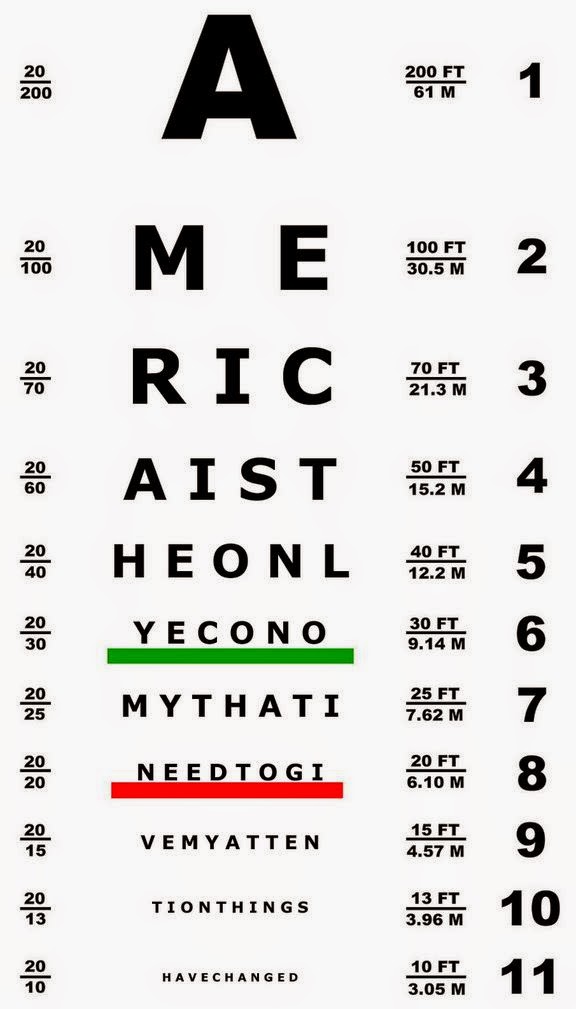 The measure of visual acuity is to contemplate information concerning the integrity of the visual system.  It measures the ability of the eye to distinguish object details, symbols or shape at a given distance.

The visual acuity test is used to determine the smallest letters one can read without glasses or contact lens on a Snellen chart or a card held 20 feet away. The test evaluates each eye separately. Ophthalmologists use different tools when testing at distances shorter than 20 feet.

To perform the visual acuity test on each eye, the patient covers one eye with a palm, a piece of paper or a small paddle while reading out loud the smallest line of letters they can resolve on the chart. In children and people who cannot understand, the doctors use numbers or pictures.

The expression of visual acuity is in a fraction. The interpretation of the fraction is:

For example, 20/20 is considered normal. 20/50 means the line you correctly read at 20 feet away, a person with normal vision can read from 50 feet away.

Even if you miss one or two letters on the smallest line you can read; you are still considered to have a vision equal to the line.

To measure visual acuity that is worse than 20/200 or 20/400, the doctor uses the following sequence of procedures: